Bristol Parks Forum are encouraging all our members to enter the RHS Britain in Bloom South West ‘Pride in Parks Awards’.

These awards are specifically aimed at showcasing community involvement as well as considering the standard of the park or green space itself. The entry process is very simple and the assessment process will provide valuable feedback to your group.

This is the second year of this award scheme, last year Troopers Hill Local Nature Reserve was the only site in Bristol to enter and it won a Gold Award.

This year there have been some changes to the scheme; there will now be only one class and entries will be awarded one to five stars with the five star rating equating to last year’s gold award. Each park will receive a plaque, with the star rating, that will be suitable for displaying in the park. There is no need to submit any supporting information with your application, but if you wish you can prepare a pack of information to hand to the assessor when he visits the site with evidence of how you meet the criteria. As an example the information prepared last year by Friends of Troopers Hill can be seen here.

The closing date for entries is 1st June 2015 and the presentation of the Plaques will take place at the Britain in Bloom South West Spring seminar in Exeter in February 2016. There are links below to the entry form and the criteria. These awards have a nominal entry fee of £15, but to launch this new award entry will be FREE for this year.

It is important that the entry is community led and there will need to be a representative of the park group at the assessment (judging). The time needed for the assessment will depend on the size of the park or green space and can be up to 2 hours. Assessments can take place any time from June until the end of the year and you can indicate on the form which month you would prefer, this is to take account of the fact that different parks are at their best at different times. There is a space on the form for special requests so that you could ask for an assessment on a particular day – eg when you are holding an event, or to avoid a particular day.

There is an address on the form to post your entry, or you can scan and email it to southwestinbloom@aol.com or simply send an email setting out the information requested in the form.

Details about the award will also be published in the Britain in Bloom South West website soon – www.southwestinbloom.org.uk 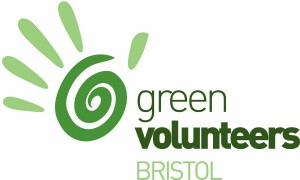 The Bristol we know and enjoy everyday is one of the greenest places to live in Europe, leafy open spaces visible all around us, some subtly hidden away, and much of it the result of the tireless, unpaid efforts of thousands of our fellow citizens.

From morning birdsong to gardens busy with insects, places to explore wildlife or simply somewhere green to walk through on the way to work, we wouldn’t be able to benefit from the city in which we live were it not for these volunteers, whose labours mostly go unrecognised.

To honour these properly unsung heroes, Bristol Green Capital 2015 is hosting this year’s Green Volunteer Awards and asking the people of Bristol to nominate their green champions.

Eight categories are divided into awards for Bristol-based individuals and projects, all recognising their efforts to keep Bristol green, rich in biodiversity and more sustainable. Nominations opened on September 23rd, exactly 100 days from when Bristol assumes the official mantle of European Green Capital 2015.

The awards ceremony itself will be held 50 days out, on November 12th, at the Paintworks on the Bath Road. Tickets for the ceremony are free but need to be booked in advance.

Nominations aren’t restricted to those who wield a shovel or fork in all sorts of inclement weather, previous winners have included people who administrate green projects, their voluntary work crucial in keeping their organisations viable.

The closing date for Green Volunteer Awards nominations is Sunday, October 26th, judging will start the next day.

On the night, award winners will receive a certificate commemorating their award, as well as plaque specially commissioned from a piece of tree felled in the Bristol area for tree conservation and sustainability purposes.

This year’s RHS It’s Your Neighbourhood Awards were announced at the Britain in Bloom – South West awards ceremony in Trowbridge on 18th September.

Many BPF member groups enter this “unique scheme for volunteer led community gardening projects/groups which are focused on cleaning up and greening up their local area”. The awards assess the work of the community groups and although they are run by the Royal Horticultural Society the judges are not only looking at horticultural activities, the involvement of the community plays a major part.

The certificates for those groups that were not able to attend the ceremony in Trowbridge will be presented at City Hall on 3rd October.

A full list of the Bristol awards can be seen here

This year Britain in Bloom – South West also introduced a new scheme judging parks and open spaces. This has some aspects in common with the Green Flag awards but is much more slanted towards community involvement as well as the standard of management of the park; the application process is also much less bureaucratic.

There are 12 Green Flag winners in Bristol this year.

The Green Flag Award Scheme covers the whole of the UK and recognises well-managed, high-quality green spaces. Any green space in the UK is eligible to win this award providing it is freely accessible to the public.

Parks Forum member Snuff Mills Action Group has for the second time been awarded the Green Flag Community Award. The Community award is for green spaces in the UK that are managed by voluntary and community groups.

In addition Bristol Parks has been awarded 11 Green Flags for parks throughout the City that it manages. Community involvement is an important part of the Green Flag Award scheme, so the various Parks Groups involved in these parks have played a major part in the City winning these awards. 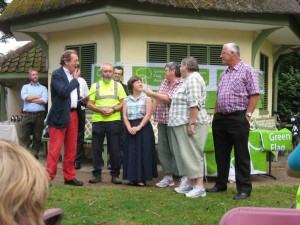 The certificates for the 11 parks were presented by Mayor George Ferguson at Blaise Castle Estate this morning.

To fly a Green Flag a park has to meet the following criteria:

To see a more detailed description of the criteria visit the Green Flag Award website.