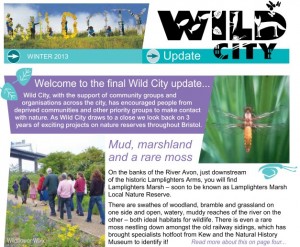 Over the past three years the Wild City Project has organised a series of events and worked with park groups and others on many of the City’s fantastic and varied nature reserves.

Run by Paula Spiers and Helen Adshead, with additional help from Justin Smith, the project was funded by the Big Lottery Fund’s Changing Spaces Programme, which is managed by Natural England under the Access to Nature Scheme. Wild City focused on 7 ‘key sites’ and also worked with 10 other ‘network sites’. Benefits have included improved access and local awareness of the sites. Many Bristol people, including the more vulnerable and under privileged, have been introduced to the sites and shown the opportunities they provide to enjoy nature and the outdoors without travelling out of the City.

Sadly the funding for the project only covered three years and the project has now come to an end. The Wild City Project followed on from the equally successful ‘Wildspace!’ and ‘Nature in the City’ projects that between them ran from 2002 to 2008. While there are many long term benefits from the project it is disappointing that at the moment there is no funding available to allow the project to continue.

The Wild City team has now published their final newsletter and this can be seen via the link below. As well as looking back on the three years of the project, Wild City is able to announce through the newsletter that 4 of their sites are about to be designated as Local Nature Reserves (LNRs) – Avon New Cut, Lamplighters Marsh, Narroways and The Northern Slopes. This will bring the total number of LNRs in Bristol to 12, see www.bristol.gov.uk/localnaturereserves.