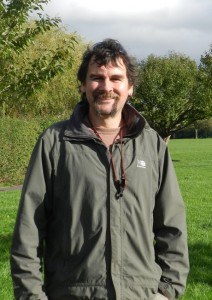 It was with great sadness that we started the BPF meeting on Saturday (8th March) with news of the death of Justin Smith from a heart attack the previous weekend. Rob spoke briefly about Justin and Tracey Morgan, Director for Environment & Leisure at Bristol City Council, added her own tribute and told us how much the team would miss him and his expertise.

Since 2009 Justin had been Woodlands & Wildlife officer at Bristol Parks and had also worked on the Wild City Project for the last 18 months. He spoke to the Forum in February last year about managing wildlife sites and about coppicing and woodland management. He also described the excellent work he was doing with Community Payback giving ex-offenders training in habitat maintenance. Justin has also given many Park Groups advice on wildlife issues and was keen to see groups getting actively involved in managing their sites for wildlife.

As well as this work with the Council many Park Group members knew him through the many fungi forays he ran across the city.

There is a Facebook page where everybody is very welcome to leave photos and memories of Justin. You will need to have a Facebook log in to see the contents. www.facebook.com/justinhongos

There was also a short tribute to Justin on Shepherd’s Way on BCFM radio on Wednesday 5th March. You can listen to the show via www.bcfmradio.com/shepherdsway, it’s about 4’50” in.

The thoughts of everyone at the Parks Forum are with his wife, Lucy, their young son, Wilf and all his family and friends. He is a great loss.