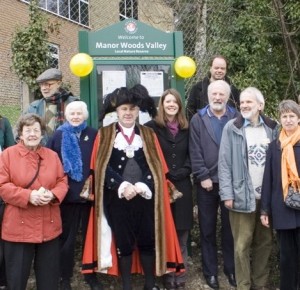 As part of Bristol Green Capital 2015, Bristol City Council wishes to achieve a network of 16 Local Nature Reserves (LNRs) across the city (target set in the Parks and Green Space Strategy, 2008).

Bristol currently has 8 LNRs. A further 4 sites are in the process of being designated (Lamplighter’s Marsh, Avon New Cut, Northern Slopes and Narroways Millennium Green). As such, they are looking to designate at least four more Local Nature Reserves during 2015.

The Council are now inviting expressions of interest from communities who may wish to see their site considered for designation as a Local Nature Reserve.

The criteria for selection are set by the legislation governing Local Nature Reserves (see www.gov.uk/create-and-manage-local-nature-reserves).
The main considerations are:
• The site is important for wildlife (we are only considering sites that are designated Sites of Nature Conservation Interest);
• The site is well used and there is high public enjoyment of its wildlife;
• The site is owned by the council (or the landowner supports designation as a LNR);
• There is a site management plan (or one can be produced during 2015), and
• Natural England would be supportive of the designation.

To seek designation of a site as a Local Nature Reserve please download and return a simple one page form from either of the links below:

Please return your expressions of interest by Monday 13th April 2015 to richard.ennion@bristol.gov.uk

If you would like to discuss any aspect, please call or email Richard Ennion on 0117 9222001 or richard.ennion@bristol.gov.uk

It may be necessary to prioritise sites for designation. Considerations will include: use of the site by the community, whether there is an active community group, importance for wildlife and potential for educational use. Ultimately, designation of a site as a LNR will be dependent on meeting legally defined requirements.

Some benefits to declaring LNRs:

• Identifying a site as an LNR clearly indicates to the local community and to visitors to the site, that it is an area to be protected and managed primarily for wildlife and for the informal enjoyment of nature;
• The LNR designation elevates a site’s status and value in the eyes of both the Local Authority and the local community. Community groups gain a sense of pride in having their site selected for designation;
• Improves accessibility, by providing more places where people can enjoy contact with nature, and
• Widens opportunities to attract grant funding.